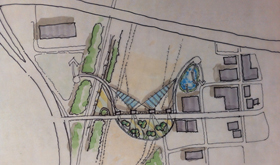 Hosted by the Kansas City Chapter of the American Institue of Arhcitects, Project Utopia was a one-day charrette and community presentation held on Friday September 7. 6 teams of designers, engineers and planners were charged to re-imagine Kansas City’s West Bottoms neighborhood. Following in the footsteps of the Kansas City Design Center’s West Bottoms studio, Project Utopia sought to take the studio one step further with concentrated professional work and then present it to the community during the popular Crossroads First Fridays event.

As a member of Team Dystopia, MOCK Studio worked with other designers to develop a new plan for the 12th Street Viaduct as an iconic entrance to the Bottoms. Team Dystopia used a dramatic gestures to create and Urban Adevnture Park that would connect Downtown open spaces on the bluff with a rock climbing wall, an urban forest and garden on a viewing platform facibng the Missouri River, hanging sleeping pods for overnight camping, suspended solar panels for power, and a fishing hole that would also clean and percolate storm water.